How to Remember 64 Things: A Systematic Memory System

I have already discussed a number of possible systems that can be used as mnemonic devices to help us remember information better; for instance by placing imagined objects into real locations or to associate numbers with specific objects.

I have experimented with a number of systems over the past few months. What I found most effective was to place imagined objects into real rooms that I am familiar with. This helped me memorise dozens of names (from reading a fiction book) and concepts (from reading a non-fiction book). 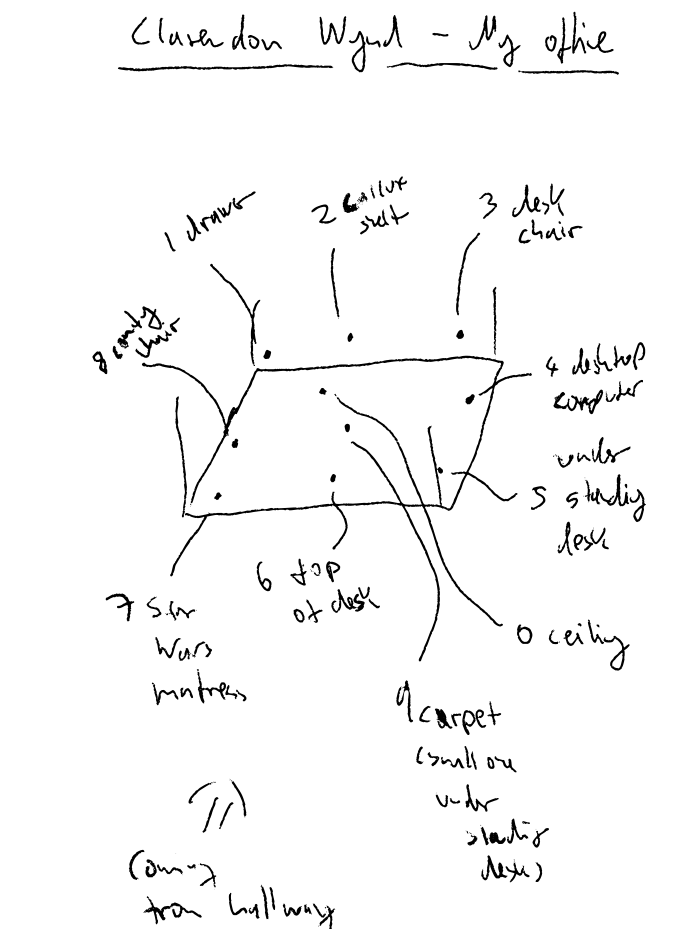 However, I found a number of problems with this approach. First of all, the way I've approached it, a room would only fit eight imagined objects (one in each corner and wall). Thus a room would quickly fill up and I quickly ran run out of rooms that I am familiar with.

Furthermore, as I was trying to remember multiple subjects at the same time, I created quite a mess due to insufficient planning in allocating rooms. I used rooms from multiple places I lived in the previous years, and I struggled to establish a consistent system for subjects that would require more than one room. For instance, I would string together rooms from multiple houses to store memories for one subject. 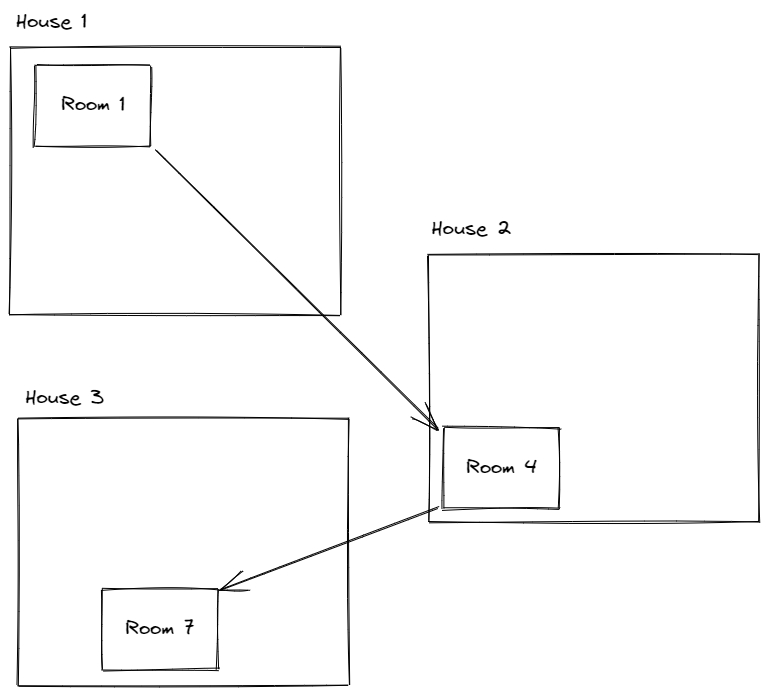 I had relatively little trouble to transition from room to room when recollecting things; but I felt that my capacity to remember things would be constrained from the limited number of rooms that I was able to conjure from my memory. I did live in many places in the past 10 years, but I must admit my recollection of many of the rooms is rather hazy.

Thus I came up with an new system or organise memorising subjects that require more than the number of places available in a single room. In the following, I will describe the proposed system, how I have applied it and a couple of extensions to the system I eventually determined not to be viable.

This system is grounded in the following rules: 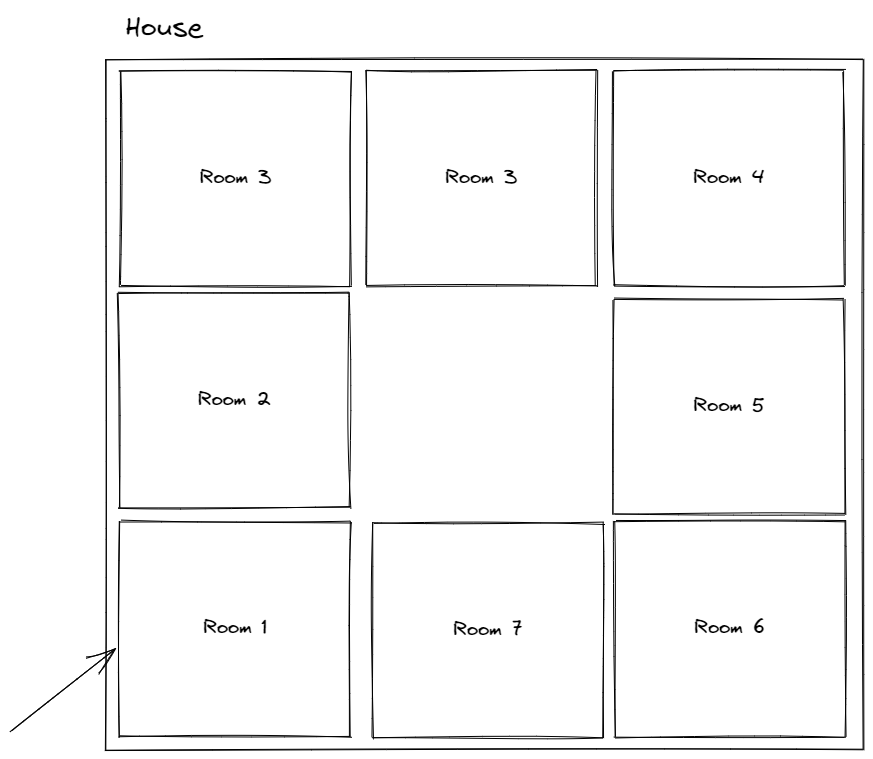 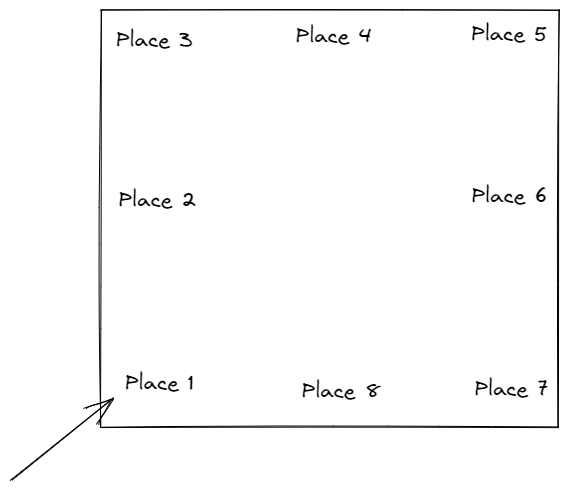 While memorising the character names of the book Rotherweird, I created imaginary rooms as I was working on remembering names. I started by creating Room 1 and then filling each place with an object. 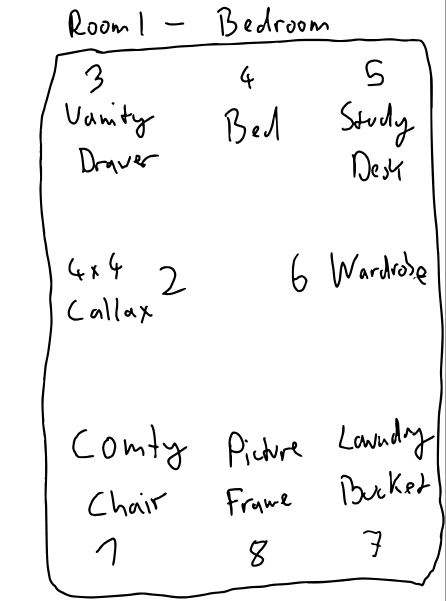 I then associated names with each of the places in the room: 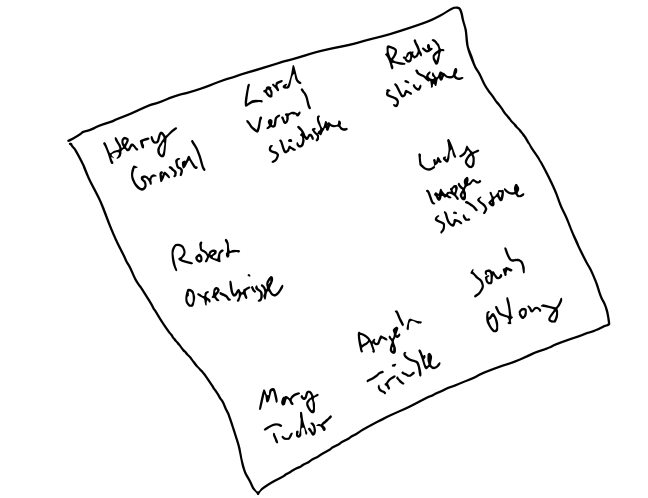 I also used the same system for memorising a few other books, namely Made to Stick and Tiny Habits.

I eventually ended up with the following seven rooms: 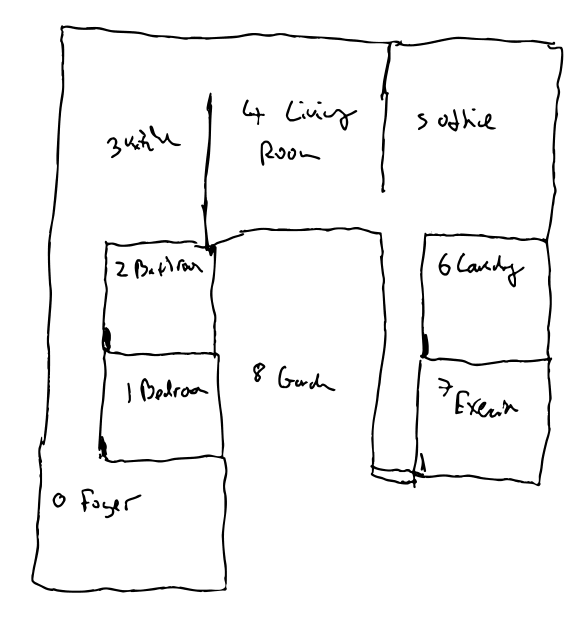 I also tried out a couple of variations to this idea that I ultimately did not find very effective.

I felt like having just 64 places could in many instances not be enough. Thus, I came up with one more layer; compounds that consists of 8 houses each.

These were each themed according to a specific time period and each have an 'anchor' image in the foyer of the house, such as the Goddess Athena for a Roman villa (thematically should have either been Minerva or a ancient Greek villa).

The idea would be that the objects identifying the places and rooms would each be flavoured by the theme. For instance, the bed in the bedroom of the Japanese Minka would be a futon.

Each of the compounds would further have a different 'starting room' for memories to be placed in accordance with its position relative to the other compounds. For instance, for the Tibetan template, being the sixth compound, the first memory would be placed in the sixth room. 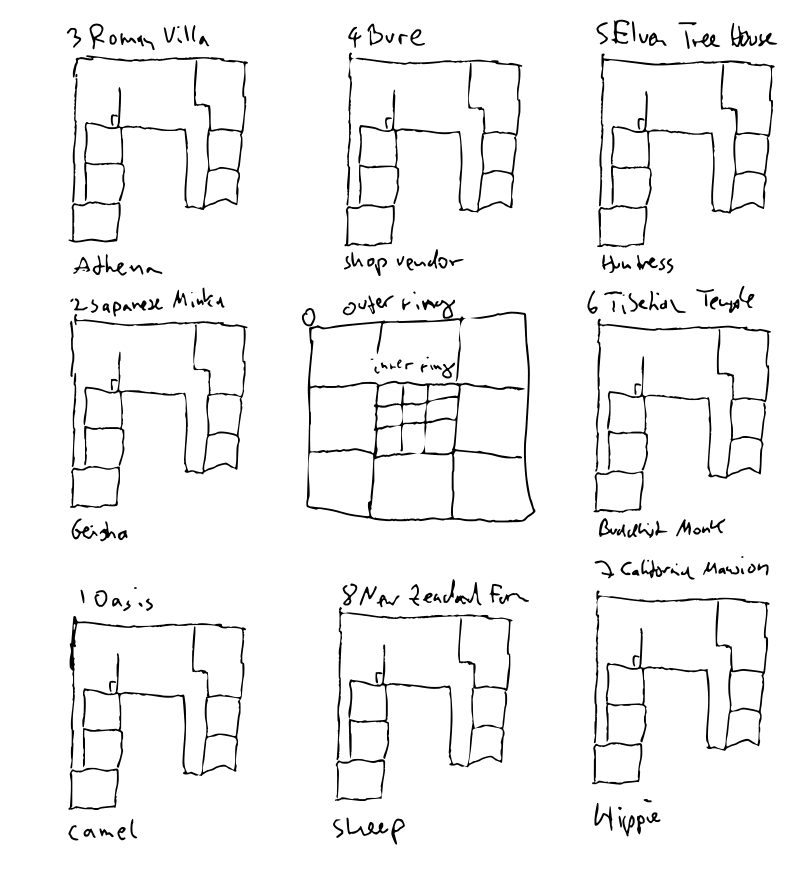 However, I found this ultimately to be too unwieldy for my unpractised brain. And while the promise of having 512 (8 rooms each in 8 houses in 8 compounds) individual places is alluring, it did not make up for the reduced clarity in visualising the images for the objects placed in the rooms in my experience.

I could imaging this being useful for a more advanced practitioner of the mnemonic arts but, for beginners, I think it is more beneficial to focus on a smaller number of places and anchor these in the memory very well.

In combination with the compound system, I also endeavoured to lay out memories according to some conceptual rules rather than just sequentially. For instance, in memorising names for Rotherweird I originally used a different compound for male and female characters. However, since a lot of information is consumed sequentially, I found it easier to lay out what I need to remember sequentially as well. This provides an anchor point for recalling the information. For instance, often related characters would be introduced at the same time, thus providing a natural contextual link.

I have been experimenting with different memory systems for almost a year now. I believe that we often under-utilise our ability to remember, and I found the ability to remember things better by painting memorable images in our mind quite useful.

In my discussions on the merits of slow reading, I mentioned that I believe it is not merely the quantity of information we are exposed to but how well we retain it that determines how learned we become. And I believe memory systems and techniques can help us absorb information better; even if it is at the extent of time and mental effort.

I am certain I am not at the end of my exploration and experiments and will continue to try out different approaches.

The current variation to the systems outlined in this article I am exploring is to have only one queue for all things that I try to remember. This queue walks through the 64 places in the house I have created. Once I run out of places, I start in the beginning again.

I write down every day in the morning all things I remembered from the previous day. This way, rather than remembering a complete book, I just aim to enhance what I remember each day. The idea is that this will allow me to capture a wider range of subjects and help me practice and refine my skill of creating and recalling mental images.

I will probably publish a follow up article in a couple of months about the outcome of this experiment.