Server-side rendering (SSR) of React applications has become increasingly popular in the past few years. Frameworks such as Remix and Next.js have demonstrated that rendering pages on the server with React is an effective way to compose applications.

In this post, I will explore how to develop a truly serverless implementation for React SSR that provides:

To get started on implementing a Serverless React SSR application, be welcome to use the customisable template I have prepared:

This template can also be forked on GitHub:

A Bit of History and Motivation

Feel free to skip this section and scroll down straight to the code 🤗.

This post is a cumulation of many years of strive and experimentation. I have long been searching for a way to develop web applications in a way that results in beautiful code ('easy to read') and just as beautiful infrastructure ('low cost, easy to maintain').

I found Next.js to be pretty close to my ideal. However, it is lacking in two key aspects: 1) Next.js introduces a lot of magic that makes it difficult to deeply customise an application. 2) It is difficult to deploy Next.js to AWS.

After Wordpress has been annoying me for years, I decided after long hesitation to migrate my blog Code of Joy away from Wordpress. After searching through many available options (including different blog hosting platforms and static rendering solutions such as Gatsby), I decided that the best option for me would be to implement my own custom blog.

I did not make this decision lightly. I always told myself that tinkering around with the blog itself was just a way for me to procrastinate on writing articles. However, I figured that this could be a good coding practice for myself and help me improve my open-source project, the Goldstack Project Builder.

The most suitable template I had available to me in Goldstack at the time I started my blog project was the Next.js template. However, for the aforementioned reasons, I decided that a blog would be served better by a new template. Specifically, a template that would support server-side rendering on AWS in a better way than Next.js does (Next.js supports server-side rendering outside of Vercel deployments, but it needs to be deployed on a VM, as a Docker image or as all code bundled up in one Lambda; all options that are not very 'serverless').

Thus, I started the process of developing a server-side rendering friendly template a few months ago. I released this template a while ago and have since also completed the implementation of the new version of my blog. This post contains my experiences and learnings from this process.

I love the way routes are defined in Next.js: one simply creates files in a dedicated directory and Next.js automatically configures routes matching the file name and paths.

Many serverless frameworks require to configure complex YAML of JSON files for defining routes. However, I wanted to maintain the same level of convenience as Next.js offers for my serverless SSR implementation.

I thus I defined the following rules for generating routes:

See below all the routes I have defined for my blog: 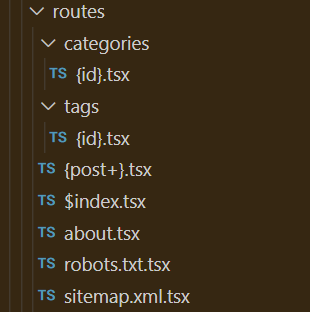 Please see the section Defining Infrastructure below for an explanation how these routes are projected onto serverless infrastructure.

The next step after defining the routes our server should resolve is to define the actual handlers that provide the responses.

See below a sample handler (posts.tsx):

(This is just the handler in the automatically generated sample project, if you are interested in the actual handler from my blog, please see $index.tsx which renders a list of posts.)

Key here is the handler method that performs the server-side rendering using the helper method renderPage as well as the hydrate(Posts); statement that ensures the page is initialised correctly on the client-side.

Note that these handlers support both server-side rendering as well as defining client-side interactivity.

Should you require any specific server-side only npm dependencies, it is advisable to create a second source file and define a method there that is called in the handler method.

(This was required for the $index.tsx file referenced above which requires making some queries to DynamoDB, see renderIndex.ts.)

We can then use the esbuild-ignore-with-comments-plugin to ensure none of the dependencies are included during client-side bundling by placing the comment /* esbuild-ignore ui */ at the beginning of our source file.

For instance, you can define a script as the following (src/server/render.rs):

And then import this render function in your handler:

As outlined in the beginning of this post, one of the key features I was interested in was to deploy each page or route in an individual Lambda function to ensure fast cold-start times.

I decided to define an architecture as follows: A CloudFront Distribution functions as the initial ingress to the application. Static files are served through AWS S3. For each defined route we define a Lambda function and an AWS HTTP API Gateway is used to route traffic to the correct lambda: 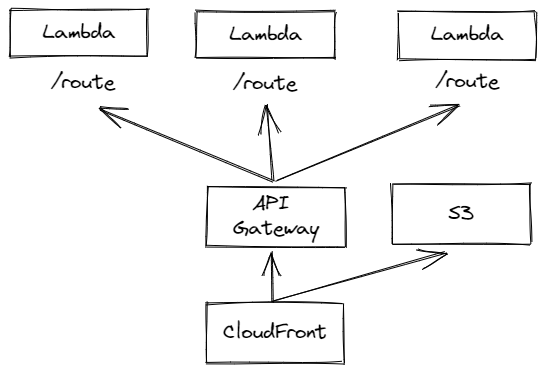 Extensibility for me is key in defining infrastructure, especially in a serverless project, since we usually need to extend or modify our infrastructure in order to implement further features.

Thus I opted for using Terraform to define the infrastructure. See all required Terraform configuration in infra/aws.

I decided to provide one common configuration for all Lambdas optimised for cold starts.

Note that the variable lambdas is dynamically provided by some tooling that translates the files in the src/routes folder into function configurations in the file goldstack.json.

This configuration is dynamically updated by a small utility packaged in the npm package @golstack/utils-aws-lambda as new routes are defined.

Apart from defining the infrastructure for our lambda functions and static files, we also need to deploy the code and resources we have developed to the AWS infrastructure.

I decided to use the AWS CLI to deploy both function code as well as static resources. To avoid having to install the CLI on the local machine, Docker is used to run the CLI.

The trickiest part of the deployment process is the client and server-side bundling, which are each discussed in further detail below:

In order to deploy a Serverless SSR application, we need to bundle the code to ensure we only deploy the necessary code to each function.

This can be achieved with most JavaScript bundlers such as Webpack, Rollup or esbuild.

I have decided to use esbuild for my reference implementation since it is fast and easy to customise. The configuration for esbuild is defined in the file src/build.ts:

This configuration uses both the esbuild-css-modules-client-plugin and the esbuild-ignore-with-comments-plugin. The former is used to support CSS modules and the latter is used to ensure no files are included in the bundle that are only required on the client.

Note that the target of the bundle is node16 and the format is commonjs as per AWS recommendations.

Apart from this, the generated .js and .css files are simply zipped and are ready to upload to AWS using the AWS CLI. See below the Zip files generated for my blog based on the routes shown earlier: 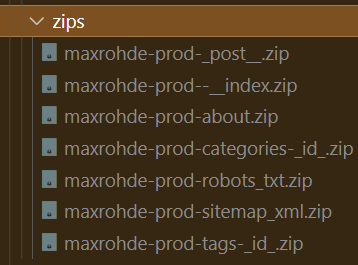 Client-side bundling is also performed using esbuild and the configuration is also supplied in src/build.ts :

Static files are served using CloudFront and thus can be loaded with minimal delay by clients.

One of the biggest challenges for serverless development is how to provide a good local development experience.

Thus I wanted to ensure that my approach allows for easy local testing. For this, I opted to use a simple Express server that serves the routes and static files locally.

For this purpose, I developed the utility @goldstack/utils-aws-http-api-local. See expressRoutes.ts to see how the local routes are mapped to Express routes.

This enables to run a simple yarn watch to have a local version of the application up and running.

This requires a whole lot of magic to function properly, including on-the-fly bundling of client bundles. However, none of this is required for deployments on AWS where client-side resources are provided as static files as discussed above.

The Good, the Bad and the Ugly

Before writing about my approach to React Server-Side rendering, I wanted to put it to the test in a real project. I am pleased that I was able to migrate my blog maxrohde.com from Wordpress to a Serverless project using the approach outlined in this post.

I found that Lambda code size stayed well below 1 MB for all routes required for this blog, even for functions including DB connectivity.

(Functions larger than 500 kb required both React and DynamoDB client libraries, the other functions have a combination of these and the function for robots.txt requires neither.) 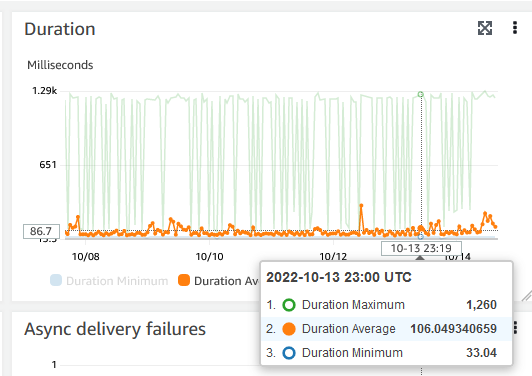 Be welcome to explore the blog maxrohde.com and the source code.

Based on several weeks of working with this approach, I found:

Where to Go from Here?

I had a great time developing what in essence is a fullstack framework for developing server-side rendered React applications. I learned heaps about how React and also CSS generation works. I will hopefully not have to re-implement my blog for a decade or so and in the meantime will continue to evolve the template.

However, if you want to give this for a spin, head over to Goldstack and select the Server-Side Rendering template. Alternatively, you can also clone the react-srr repository which is automatically kept in sync with the template.

If you have any thoughts or ideas, please don't hesitate to reach out on the social platforms or by creating an issue 🤗.